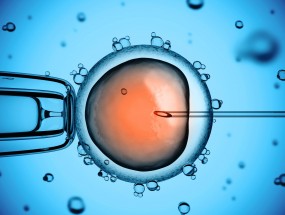 ICSI is a technique used in couples where there is a significant male factor problem to achieve treatment success similar to those with other causes of subfertility.

The ICSI procedure is performed in the laboratory and involves taking a single sperm and injecting it into a mature egg.  If the egg fertilises, the resultant embryo is placed in the womb of the patient.

ICSI may be recommended by your doctor when:

Following the egg collection, the embryologist will check the eggs to ensure they are mature and suitable for ICSI. Only those eggs that are mature can be injected with sperm. Approximately 30% of eggs are found to be immature, and therefore cannot be used for ICSI.

Numerous published studies report that the incidence of abnormalities in foetuses and children from ICSI are no greater than IVF. Current information also suggests that the growth and development of ICSI children is similar to naturally conceived children. However there is a risk that some male infertility problems may be passed on.

Monitoring of the pregnancy is offered to PIVET patients to assess abnormalities in the developing baby however, these procedures are not capable of detecting all abnormalities. PIVET can therefore not guarantee that any child born as a result of ICSI will be free of genetic or other abnormality.

ICSI has so far resulted in over several thousand pregnancies worldwide. PIVET’s own data published in 2018, showed the risk of significant congenital abnormalities in babies generated from ICSI created embryos is low at around 1.9%. Of the 415 babies born through ICSI generated embryos, there were only 8 significant congenital abnormalities from data collected between 2014 and 2017.

Unfortunately, not all pregnancies will result in a baby. Miscarriage most frequently occurs very early in the pregnancy. PIVET will monitor the early stages of the pregnancy (first 8 weeks) closely via blood tests and ultrasound scans.