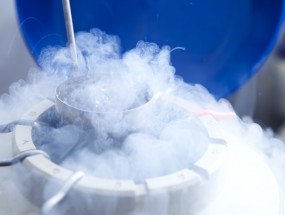 Oocyte freezing is a method of storing a woman’s unfertilised eggs to allow her to try to conceive at a later date.

It may been seen as a way of preserving the fertility for women who are not in a position to becoming pregnant straight away, or whose fertility is as risk for medical reasons such as cancer treatment which may cause sterility.

The technology for oocyte freezing was first developed in the mid-1980‘s, but has only recently been introduced into fertility clinics with improved success rates.

However, the survival post-thawing (around 85% survival), along with subsequent pregnancy rates are still lower than that of embryo freezing.  Despite this, there are many reasons, both medical and social, why you may want to freeze your eggs instead of embryos.

Frozen eggs may be stored for many years without significant deterioration.  Western Australia Regulations allow for frozen oocytes to be stored for a maximum of 15 years, and it is not possible for them to be used posthumously.

Who would benefit from oocyte freezing?

You might consider this option of freezing your oocytes if your fertility is at risk from a serious illness such as cancer, if you wish to preserve your fertility due or if you are commencing ovarian failure.  You may not be in a position to have a baby right now and would like the opportunity to start a family beyond the age at which fertility naturally declines.

For ethical or religious reasons, the freezing of embryos is unacceptable for some people, and oocyte freezing is a preferable option.  If a couple are undergoing an IVF cycle and the male partner is unable to provide a semen sample on the day of egg collection, it is possible to freeze the oocytes and fertilise them at a later stage when sperm becomes available.

What is the oocyte freezing process?

The oocytes are harvested from the ovaries in a day theatre procedure lasting about half an hour.  The woman undergoes stimulation of her ovaries through the use of fertility drugs in order to produce multiple mature oocytes (around 5-15).  Once in the laboratory, the eggs undergo a freezing procedure called vitrification. This involves rapidly freezing the eggs to prevent potentially damaging ice crystal formation.

When the woman is ready to use her eggs, they are thawed out, then fertilised with sperm using the ICSI procedure.  The aim is for the fertilised egg to develop into an embryo, which can then be transferred to the woman’s uterus giving a chance of pregnancy.